Aardvark So Low and It Shatters Tower Windows 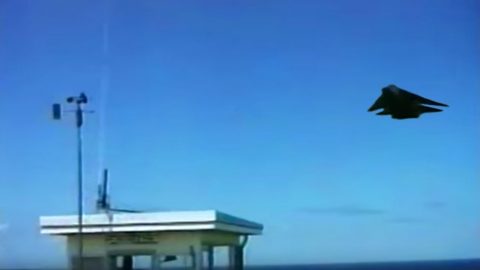 These Guys Didn’t Even Care.

So, Australia is a pretty amazing place. They have beautiful beaches, cute kangaroos and apparently pretty loose flyby laws. This video will definitely drive that last point home.

The United States and the Royal Australian Air Forces were the primary users of the F-111 Aardvark. A tactical attack aircraft, the USAF replaced it by the B-1 Lancer in 1998 while the RAAF used it until 2010. This is why we can now watch this video in somewhat decent quality.

Filmed in 1994, a couple of guys were waiting in the tower for the pilot to do a flyby. We’re assuming it was all set up, as the F-111 buzzed it a couple of times. On the first pass, however, the windows shattered.

Over the course of their service, there were 563 Aardvarks built.

The guys didn’t get mad or anything, they just started laughing. We’re pretty sure they could feel that shockwave deep in their chests. After a couple more flybys, the cameraman walked around the tower to show the damage. There was a bit more than broken glass, that’s for sure. Check it out for yourself.

Just as a side note, this video only has about 24,000 views on Youtube which is sort of crazy. How many flyby videos have you seen where the shockwave blew out the windows? Like us, you’re probably thinking “none.”

Well, share this video to show folks out there that it is actually possible because many people don’t believe it.