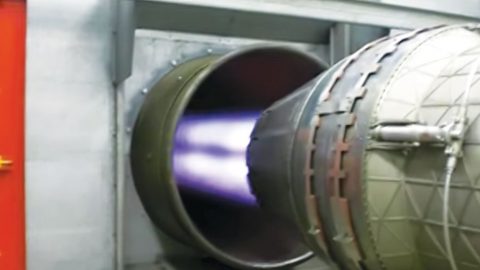 First and foremost let us warn you, if you’re wearing headphones turn your volume down because this monster is LOUD. It’s not even that the microphone got overwhelmed and distorted the sound. No. The afterburners create a sound unlike any other.

Not that that’s out of the way, let’s see what we’re looking at here. Surprisingly enough, although this footage was filmed in 2011, it actually has really good quality. No pixelation and no distortion. We like that.

As for the subject matter, it’s an F-16 jet engine strapped into some pretty serious rigging while being tested. Before any new engine is placed into a new plane (what ever the plane may be,) they have to go through cycles to make sure everything is in working order.

What you see here is General Electric’s F110-GE jet engine (not sure what block) which gives the F-16 anywhere between 28,000 to 29,440 lbs. of thrust. That’s a lot of kick for such a relatively small plane. Check it out and see that mesmerizing purple flame.