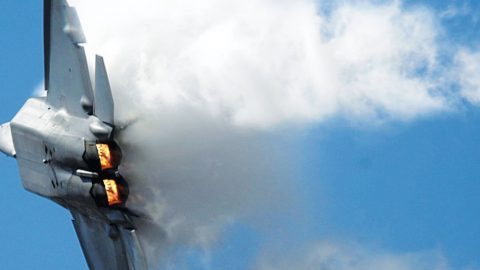 Although this video was taken in 2007, the quality is pretty great. No pixelation, no blurry shots. We will warn you though that it is a bit shaky as someone was taking it during an airshow but it’s totally enjoyable. Trust us.

As for the subject matter, what you’ll be seeing here is the F-22 Raptor. This footage was taken only two years after it was officially introduced to the public in 2005. For these folks it was probably the first time they set their eyes on this wonder of engineering.

F-22 Raptors are no longer in production and are going to be replaced with F-35 Lightning IIs.

The first fifth-generation fighter, the F-22 Raptor is a completely different animal than its older family of jets like the Eagle, Falcon and Hornet. It is virtually invisible on radar so it can strike both air and ground targets before they even know it’s there.

Also, its maneuverability is almost unparalleled by any other fighter. Unlike other fighters, it can perform extreme maneuvers at both slow and supersonic speeds, making it a great dogfighter if need be. With its stealth technology however, it probably won’t ever need to though.

As for this video, check out how this thing can turn on a dime. We talked to a pilot when we saw this video, and he said that the guy in the cockpit must have been pulling some 8 to 9Gs during those turns. Whoa!