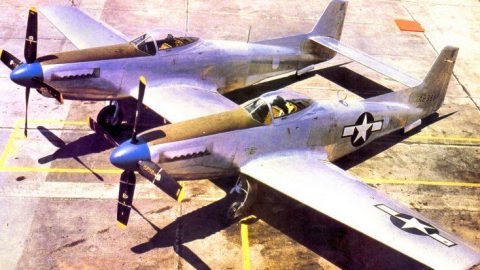 What’s better than a P-51 Mustang? Well, how about a North American F-82 Twin Mustang?

The design incorporated two Mustangs into a single plane, which would serve as a long-range escort fighter to support B-29s. Both cockpits were fully operational and a pilot could be stationed at either to control the plane. Production on the F-82 was completed in 1946 and the fighter narrowly missed its mark to serve in WWII. The Twin Mustang would see combat in the Korean War and was also the first plane to shoot down enemy aircraft in the conflict.

The F-82 was successful in incorporating long-range into a fighter and set a world record traveling from Hawaii to New York without refueling. As American aviation transitioned towards jet-powered aircraft, it was decided that the F-82 Twin Mustang would be the Air Force’s final piston fighter.

“By late 1951, most Twin Mustangs had been pulled from front-line service as the air war over the Korean peninsula became increasingly dominated by jet fighters like the Soviet MiG-15 and the American F-86 Saber. Cold weather variants continued to fly air defense for the Alaskan Air Command before the plane was finally retired in November of 1953.”

An estimated 250 F-82 Twin Mustangs were built and only about five survive to this day. One of the few remaining Twin Mustangs is currently undergoing a restoration process to become flyable once again. This clip shows footage of the Twin Mustang coming to life for the first time in years.