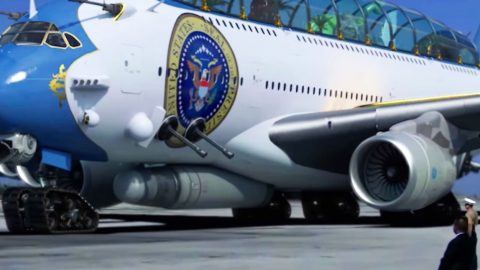 Cool. Stupid. What Is It?

We honestly don’t even know where to start here. Seriously. We don’t. This video is slightly political in a humorous way and we really don’t want to incite an all-out battle between the parties.

On second thought, it happens on our blog and Facebook pages all the time even though we could be writing about airmen’s letters from home. It really doesn’t matter. Someone out there will start a fire.

So, without further ado, here’s a very interesting and over the top rendering of one visionary’s Air Force One.

The name of the guy is Neil Blomkamp. An incredibly talented writer and director who is responsible for the movies District 9, Elysium and Chappie, he made a little short CGI rollout of a “Trump Air Force One”.

Complete with an upstairs oasis for him to get his rich on, it has plenty of cannons, turrets and what looks like a nuke to take care of itself.

This is, of course, a joke. Nobody’s saying Trump this or that in terms of politics, what this is meant to depict is that he likes to feel safe and enjoy his luxurious lifestyle too. No more. No less.

We here at World War Wings would like to add that mixing a little Spooky with Air Force One would be pretty badass, even if just in theory.