Yesterday, Russia Unveiled Deadly Nukes But It’s This Image That Is Most Troubling 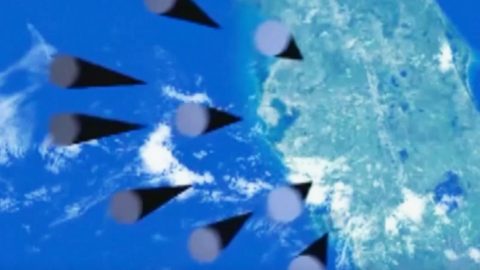 A Direct Stab At The States?

Yesterday’s major story centered around Russia and Putin’s quite stern speech to the whole world. You can read the whole story here, but here are the important notes.

Russia’s elections are a few weeks ahead and the frontrunner, of course, is Vladimir Putin. Although his reelection is in the bag, he did make an appearance in front of Russia’s elites outlining his past and future accomplishments. Those included developing hypersonic nuclear ICBMs which he phrased were “invincible.”

He then proceeded with showing the room a short animation of how these nukes work but in the middle of it there was something no one really noticed. Sure, North Korea always releases propaganda videos directly threatening the United States but no one takes those seriously. They’re almost silly (check this one out.)

A country like Russia however, being a superpower, doing something like this deliberately carries a lot more weight and can be considered a direct threat.

Noone is sure why Putin or anyone involved in making this chose to put Florida in the animation. One theory is that one of Trump’s resorts is located in Tampa and that was some sort of stab at the President.

Let us know what you think in the comments section. Was this just a coincidence, a misintended example or a direct threat?