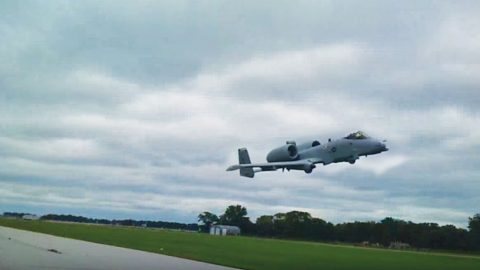 Not Once But Twice.

A Youtube subscriber who calls himself bigoxo16 uploaded an A-10 video that’s now one of our favorites. He’s in for a big surprise when he sees his view count as he took this almost 6 years ago in 2011 and only had a bit over 2,000 views. He’s about to get a lot more because we feel like you A-10 fanatics will share the everliving daylights out of this.

According to his description, he filmed this on the main runway of the Toronto City Centre Airport during the Canadian International Air Show. Now, we didn’t see any spectators in that video. From the looks of it, this was an airshow for just one guy, namely, him.

He is standing in the middle of the main runway apparently. In how many places in the U.S. can you get away with that? We don’t have solid numbers, but we’re guessing none.

Either way, he captures one of the finest, not to mention best sounding A-10 flybys ever. Not only that, the pilot turns around (take note of that turn radius) and gives him an even lower flyby than before.