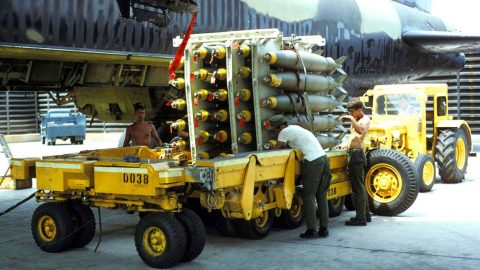 Not Many People Know How That’s Done.

Unless you’ve done it yourself in the service, not many people know how a B-52 gets loaded up with bombs. This video, although a bit long at 13 minutes, will show you exactly that. For time’s sake, we found a good point to start you off about 5 minutes in when the guys actually start working on the bombs.

B-52 Stratofortresses were first introduced in 1955. Although they might be considered old, these bombing mama jams are constantly being maintained and upgraded and are expected to stay in service into the 2040s. That’s almost a century if you’re counting.

Just as an FYI, if you fast forward or just stick around toward the end of the video, you’ll actually see a real live drop of those bombs. During an exercise, a camera was put into the bomb bay and you can see the crew carpet bomb a narrow island.

Pretty precise one must say.