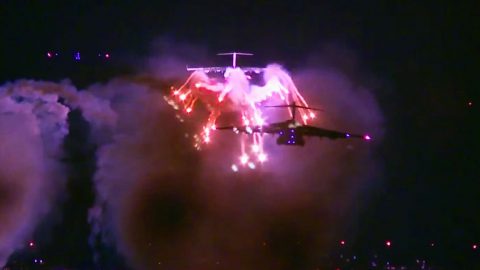 That’s A Lot Of Angels Of Death Right There.

We were pretty stoked when we found this video. We’ve seen plenty of “Angels of Death” performed by C-130s, all of them during the day. Watching 3 C-17 Globemaster IIIs doing it is better. Doing it at night? Absolutely epic.

This footage was filmed a couple of years ago during Large Package Week, or Jump Week as many people know it. It’s a quarterly exercise which helps the 82nd Airborne and Air Mobility Command units work together. From large formation flying to dropping paratroopers, cargo and equipment, this is a cool event to witness if you like anything military.

C-17 Globemaster IIIs were first introduced in 1995, and since then 297 of them have been built.

This particular video was taken by Airman 1st Class Carly Kavish back in 2014. This particular Jump Week took place in Anchorage, Alaska. Although common, we’ve never before seen any night footage of the event, so we were pleasantly surprised when we did.

Check it out and tell us what you think. We think this looks superb.