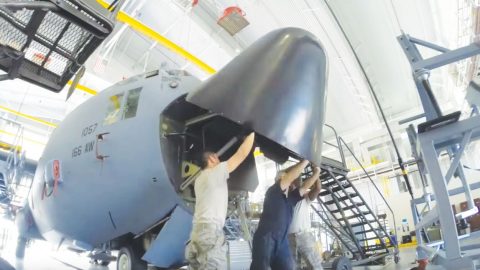 This Is Really Cool To Watch.

When we think of our favorite planes, we usually think of them in action; doing what they’re supposed to do. Fighters are pulling Gs and firing missiles while transports drop off troops or unload Humvees in mid-air. That’s all well and good, but the men and women who keep these planes in the air should get recognition too. Without them, these planes wouldn’t fly.

The C-130 Hercules was first introduced in 1956 and is still in production, making it the longest produced military aircraft.

What we found here is a video of a maintenance crew doing a heavy overhaul of a C-130 Hercules. The whole process takes 23 days, but the PR department captured the whole thing and made a 4 minute time-lapse video out of the footage. The angles and different aspects of the job they captured are pretty neat so if you’re a gear head, you’ll really enjoy it.

Think about this though. Most of our inventory of aircraft is decades old. Our main heavy bombers, the B-52 Stratofortesses, were first built in the 50s. The first C-130s were introduced in 1956. Although the older models are probably scrapped by now, the inventory of over 2,500 of them that we have is aging quickly.

It’s up to the people in this video to keep them in tip-top shape, something they’re doing quite well. Check it our for yourself.