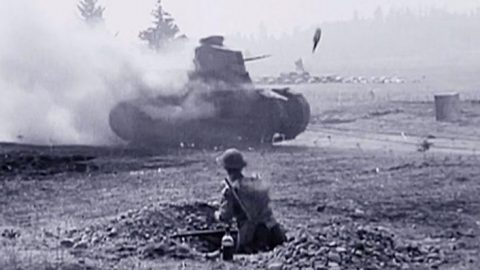 Message In A Bottle.

When Russia invaded Finland in 1939, the civilians found themselves to be outmatched the be massive tanks pushing their way through the country. Vastly overpowered by the Russians the Finnish people were desperate for a way to hold off the invading forces. The savior came in the form of a glass bottle, a makeshift bomb more commonly known as the Molotov Cocktail. Named after Vyacheslav Molotov the Russian Minister of Foreign Affairs, it was a crude bomb capable of destroying Soviet tanks. It was made from a glass bottle filled with a flammable solution such as gasoline or kerosene. An oil soaked rag was then inserted into the bottle, set on fire and thrown at heavy vehicles. The fire would spread and hopefully set fire to a tank’s fuel source causing an explosion to destroy the vehicle. The Molotov Cocktail has proven to be a timeless incendiary device and remains in use to this day, often during riots or protests. Military weapons experts go into greater depth on the destructive power of the little bottle that blasts tanks in this clip from Weaponology.