B-52 Makes High Crosswind Landing, But Not Like You’d Expect 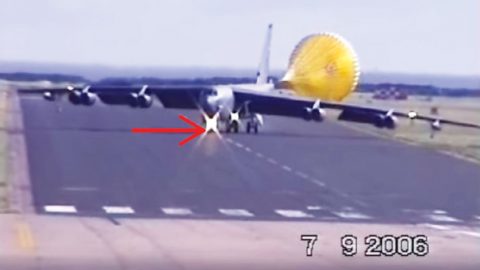 This Is Pretty Neat.

Crosswind landings are a pretty standard maneuver (unless you’re facing hurricane winds of course), and military, commercial and private pilots must know what they’re doing when approaching a runway in such conditions. For a layman, however, it could look and feel pretty scary if you’re onboard, especially if you’re looking out the window and don’t see the centerline.

A lot of you folks who follow us have some military background and if not you’re just fanatical about military planes. Because of this, this might not come to you as much a surprise, but we actually had no idea that B-52 can land the way you’ll see in this video.

There are three basic ways to land during a high crosswind:

To go over this really fast, a “de-crab” is pointing the nose into the wind on approach and correcting it just before touching down. Alternatively, the “crab” is best done on slippery runways and consists of touching down while still pointing towards the crosswind and correcting once on the ground. Lastly, a “sideslip” utilizes the crab technique but points the nose down the centerline on final approach and banks the wings to touch down the upwind gear first before settling down the downwind gear.

The whole point of this is the fact that although we knew the basics of these landing types, we had no idea that B-52s had a fourth option. Their landing gear has the ability to pivot 20 degrees. You’ll be able to see that clearly in this video.

What this means is that B-52s don’t have to straighten out when they land. While crabbing, they can simply land in that position and taxi while not parallel to the runway.

The more you know.