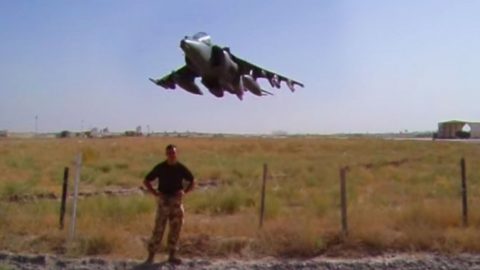 War Can Be Boring.

Anyone who has served will tell you that war is boring. It, of course, depends on what it is you do, but as a grunt, for example, there could be hours if not days that you’re just waiting around. Then, of course, are bursts of pure terror and adrenaline.

What we have here is definitely that downtime. Probably bored out of their minds, these soldiers wanted a little pick me up and let us tell you, they got it.

Judging by their accents these guys are probably British (sorry if we got that wrong) and the description says that this happened in Afghanistan. Also, we figure that there is a runway in the back of them and these guys just lined up knowing that one of the jets would be taking off.

As men often do, the guy that wanted to get buzzed flexed his ego a bit and said that he wouldn’t even flinch. As the Harrier comes in closer and he could hear it though, he turned around to gauge it. It did get too close for comfort for him in the end, and he hit the ground fast. Honestly, he waited longer than some of us would.

Got to hand it to that pilot too. He was hauling ass and kept it super low. Kudos man!