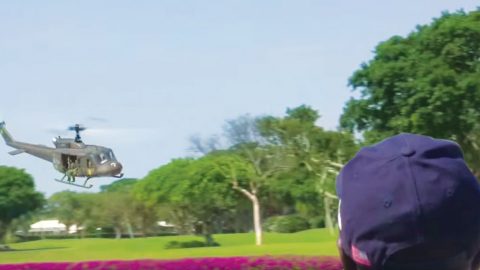 From Far Away You Wouldn’t Even Be Able To Tell.

We found this little gem on Youtube a while back. Uploaded by user JestRR, the video is titled “HueyVets and Dan’s RC Turbine Huey.” That’s all the information we could get on this Rc build. When you see the video though, you might want to thank Dan personally.

This sizable Huey looks and sounds stupendous. Complete with GI dangling from the side, when you look at it from a distance you probably wouldn’t be able to tell it’s actually a model. It’s really that good.

As an added bonus, the guys who built and filmed this had a pretty brilliant idea. They placed a high definition camera inside of the cockpit. Not only that, they actually have a miniature pilot at the controls so when you watch it, if has a very real feeling to it.

Also, with today’s technology, that camera feed can be transmitted to your phone and those VR gear headsets. That way, you can literally fly whatever model you’ve built and get the feeling like you’re actually in it. How awesome is that?