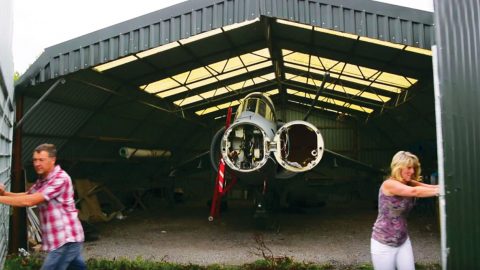 Boys And Their Toys.

How does that saying go? “The bigger the boys the bigger the toys?” This video must be a pretty good testament to that as it’s pretty much exactly what happened.

Some people might take up stamp collecting. Others that are more handy might try restoring a vintage Mustang. Niel Banwell however, started restoring a Harrier Jump Jet.

Back in 2007, Niel came across the fighter jet on Ebay of all places. It was listed for only 10,000 pounds which back then would have amounted to about 20,000 USD. That’s a lot of money, but then again, you’re buying a jet. Although it was in shambles and was missing the engine, Niel’s goal is to restore it as close to original condition as possible. We’ll let him tell the rest of the story however through the video.

Now, his family, people from around town and even aviation enthusiasts as well as people affiliated with museums around the world are flocking to his backyard. You can’t blame them though. This is a lot cooler than a garden or a fountain one might have in the back of their house.