ULTIMATE P-51 MUSTANG FLYBY – NOT A WHISTLE BUT A SCREAM 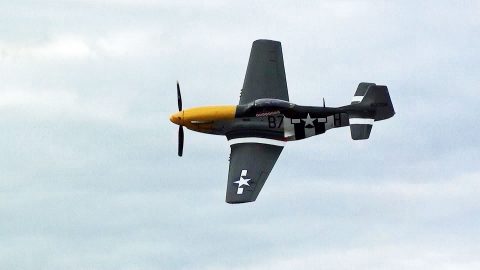 The P-51 Mustangs were developed by North American Aviation in the early 1940s. Used by the United States as a long-range fighter and fighter-bomber powered by an Allison V-1710 engine, it was a force to be reckoned with although it had limited high-altitude performance.

Throughout the war years, the P-51 went through many modifications, eventually ending up with a Packard V-1650-7 engine, which was two-stage and two-speed supercharged. With this improvement, the Mustang was then able to be competitive above 15,000 ft., allowing the Allies to establish air superiority against the Luftwaffe. This particular four prop Mustang was fitted with a Rolls Royce Merlin engine.

As told by a German commander in 1944, ‘When I saw Mustangs over Berlin, I knew the jig was up.” Right before the end of the war, Operation Jackpot began with Mustangs flying over German airfields destroying whatever was left of the Luftwaffe’s planes. Although less effective during ground attacks, the Mustang was one of the Allies’ greatest plane.