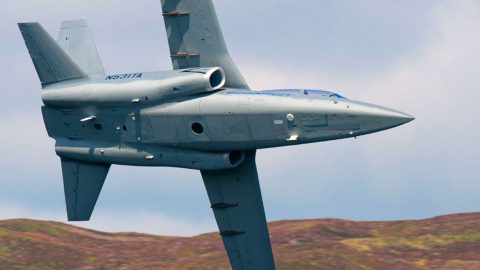 The United States Air Force is currently in the midst of searching for a new light fighter. Several aircraft entered the competition to be the replacement for the A-10, but only a few remain. However, one of the most impressive light fighter models that was not selected has actually found a buyer from another nation.

The Textron Scorpion was once the frontrunner for the US Air Force’s light fighter competition but they passed on it. The Scorpion was the only aircraft in the competition that actually used a jet engine and an advanced avionics system.

The nation of Saudi Arabia has expressed interest in purchasing the Textron Scorpion to their growing air force. Because the Scorpion was built without Government contracts it does not have to go through additional channels in order to be purchased by foreign nations.

It is likely that the Saudi Air Force will use the Scorpions as a cheaper alternative to their current F-15S Eagles. The Saudis are currently engaged in combat against Houthi Rebels backed by the Iranian Government and using their current $100 million aircraft against militants who lack an air force is a bit of an overkill.

The Textron Scorpion is a truly impressive fighter jet for what it does, especially with the low price tag of $20 million. It is nice to see it picked up after all the work that was put into it, especially as an alternative to jets based on government contracts.