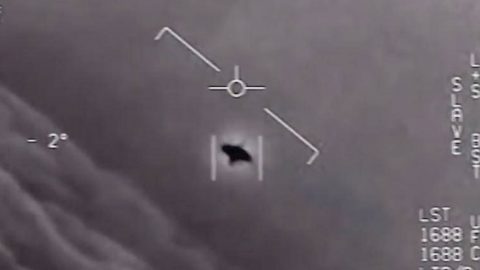 Back in 2004 US Navy pilots were on a routine patrol off the coast of San Diego, California when something unusual happened. The F/A-18 Super Hornet pilot spotted an unidentified flying object roughly the size of a school bus and recorded it. The film remained classified until recently when the Pentagon came forward claiming it is part of a much larger picture.

“My gosh. They are all going against the wind, the wind is 120 miles to the west… look at that thing, dude.”

The pilot claimed it was a drone, but the way it moves is not typical of drone technology. The fact that this puzzled experienced Navy pilots warranted a larger investigation into the this UFO.

The declassification of this film comes along with the revelation that there is actually a big budget Pentagon initiative researching UFOs. This is labeled under the name Advanced Aerospace Threat Identification Program and was canceled in 2012 due to concerns about its $22 million budget. The program went unnoticed under an unsuspecting name but did manage to investigate hundreds of similar incidents before its termination.

“We have clear things that we do not understand how they work, operating in areas that we can’t control.”

This program was initiated by former Senator Harry Reid who is a UFO enthusiast and commented on the program.

If anyone says they have the answers, they’re fooling themselves.

We don’t know the answers but we have plenty of evidence to support asking the questions. This is about science and national security. If America doesn’t take the lead in answering these questions, others will.

Details about this particular object are still scarce, there is no telling whether it is friendly, a foreign aircraft of possibly alien. See for yourself in this clip with additional commentary from members of the research program.