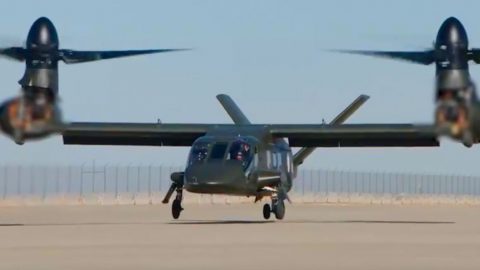 It’s been four years since Bell Helicopters and Lockheed Martin unveiled their newest VTOL aircraft but it has finally started flight trials. Although a bit shaky (think V-22 Osprey when it first took off) this just proved that the concept is viable and ready to move ahead.

The U.S. military launched the Future Vertical Lift (FLV) in 2009 to replace the worn out fleet of helicopters the Army is currently working with. The hope is that one design can come in three sizes to replace light helicopters such as the Kiowa, transport and attack versions of the Black Hawks and Apaches and eventually heavy lifters such as the Chinook.

After much competition between various companies, the DoD chose Bell’s V-280 Valor. It looks a bit like Boeing’s V-22 Osprey, but it has all state of the art avionics and other gizmos we can’t know about yet. (See picture above)

That’s where the blur comes in.

Although it is known the testbed was using General Electric’s T64 engines, there is no word on what will power the final product. The only information we could find is that the Army is funding the research which was dubbed the “FATE” to develop a new type of turbine engine.

Maybe that’s what they used for this test flight and didn’t want to expose any sensitive inner workings? Just speculating here.