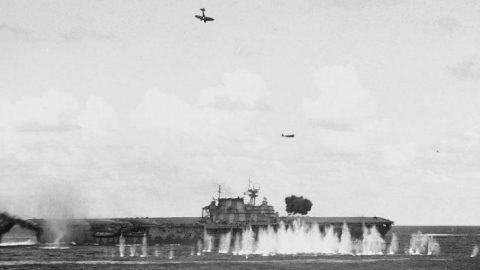 Not all war stories are ones of victory and triumph over the enemy, there are many losses along the way. With every war, you fight valiantly to win some battles but it only takes one loss to spell disaster. This is very much the story of the USS Hornet with its rise and fall during World War II.

The USS Hornet was commissioned shortly before Pearl Harbor and was soon thrust into battle in the Pacific Theater of War. It was one of the most powerful American aircraft carriers of WWII and fought in many significant conflicts. The USS Hornet was the ship that Lieutenant Colonel Jimmy Doolittle launched the legendary assault the “Doolittle Raid.” It also helped the U.S. Navy win the Battle of Midway and played a big role the Soloman Islands Campaign.

It was a successful vessel early on in the war, but it would ultimately meet its fate against the Imperial Japanese Navy during Battle of Santa Cruz Islands. During the 10-hour conflict, the USS Hornet was ambushed by Japanese torpedo bombers causing it to lose power. Suddenly the ship was unable to launch or land aircraft on its deck.

The US Navy tried as best they could to tow the damaged vessel away from the ensuing carnage but another wave of Japanese bombers launched a torpedo assault and destroyed the aircraft carrier. This archival footage shows the last moments of the USS Hornet as it gets bombarded by torpedoes.