USS Wisconsin Unleashes Four Of Her 16 In. Guns For The Last Time 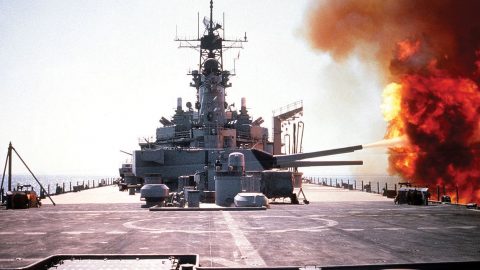 Let’s step back to May 28th, 1991. USS Wisconsin was getting ready to be decommissioned, so as a last “hoorah,” the crew blasted her huge guns one final time. We’re sure glad they did and managed to get it on film.

Although the video is exciting onto itself because seeing these things go off is awesome, we’ll give you a bit of a background on the ship herself. She’s had quite a history.

Laid down in 1941, BB-64 was commissioned on April 16th, 1944. She was taken out of service four times over her service life, but her final days you’ll see in this video.

As for her accolades, her crew earned her five battle stars during World War II. She also received one for the Korean War as well. Taking part in Desert Storm, she received a Combat Action Ribbon as well as a Navy Unit Commendation. Like we said, she has a lot of history.

As of today, USS Wisconsin is docked in Norfolk where she is listed on the National Register of Historic Places. Now that you know a bit about her, check out those guns!