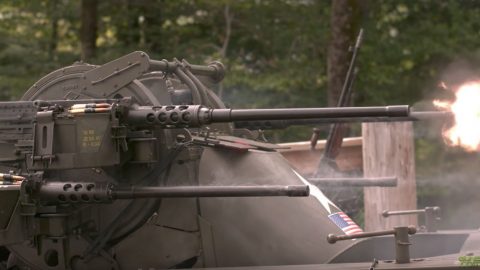 Sometimes YouTube serves you the freshest videos ever. While looking for some military type stuff and literally getting lost for a while, YouTube’s suggested video box served up this here video. We would have never searched it ourselves, but there it was.

It’s pretty epic is what we’re getting at here. Not only are the shots fired in slow motion so you can see the mechanisms at work and all that good stuff, but they fire a bunch of really, really cool guns.

We couldn’t find the retail price of the camera they’re shooting with, but we found a used one for….$31,000.

According to the description, these lucky folks went to the Green Mountain Boys Machine Gun Shoot in Vermont and brought this nifty camera with them. It can shoot 1,600 frames per second. Then, they went all out.

The shot everything from handguns to vintage machine guns. As a side note, the guy firing that sweet Quadmount said his teeth chattered when he fired them.