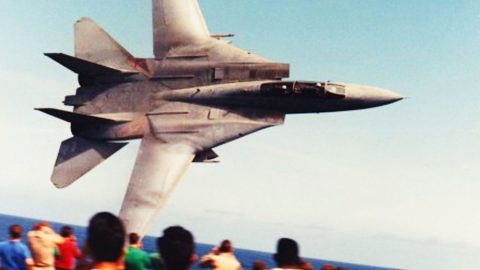 It’s As Cool As You Would Have Thought.

Many of you have probably seen this picture over the years. It’s been floating online ever since you could look up an image of an F-14 Tomcat. For the longest time, though, we thought it was fake. In the age of Photoshop, anything is possible and this photo looked so amazing and almost unreal that we figured it was just that. Not real.

Not only that it was performed by a guy a lot of us know, namely, Dale “Snort” Snodgrass. He’s been around the airshow circuit for decades, flying anything from F-86 Sabres to P-51 Mustangs. We also knew that he was a Tomcat driver as well, just not that he did this particular flyby.

We dug deep into this story and found out it took place in 1988 next to USS America (CV-66). With families of some of the sailors onboard that day, Snodgrass wanted to give them a good show.

Here’s what he said about it in an interview:

“It’s not risky at all with practice… It was my opening pass to a Tomcat tactical demonstration at sea. I started from the starboard rear quarter of the ship, at or slightly below flight deck level. Airspeed was at about 250 knots with the wings swept forward. I selected afterburner at about ½ miles behind and the aircraft accelerated to about 325-330 knots. As I approached the ship, I rolled into an 85 degree angle of bank and did a 2-3 g turn, finishing about 10 – 20 degrees off of the ship’s axis. It was a very dramatic and, in my opinion, a very cool way to start a carrier demo. The photo was taken by an Aviation Boson’s Mate (by an ABE3 who was the petty officer of third class Sean E. Dunn that was in charge in Launching & Recovering Equipment) who worked the flight deck on the USS America. Just as an aside…the individual with his arms behind his back is Admiral Jay Johnson” who became the Chief of Naval Operations for the Navy.”

We do have to apologize but there is no sound. We’re not sure if this flyby was recorded this way or if got lost when it was reformatted or simply because this particular version doesn’t have it. Either way, this pass is historic and we’re glad we got any sort of chance seeing it on video.