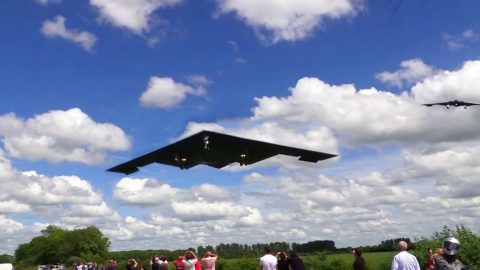 Such Great Feats Of Engineering.

Honestly, we’ve never been buzzed by a B-2. We’ve seen one from far away, but that’s about it. We have, however, seen tons of videos of them, but nothing like the one we’re about to show you.

Named Death 11 and Death 12, these stealth bombers are stationed at Whiteman Airforce Base in Missouri. It is rare that they go overseas, but here, they did and you lucky folks get to see it.

You don’t see B-2 Spirits flying around at airshows. Quite the opposite, they’re very rarely displayed as they’re insanely expensive to operate (cost per flight hour, maintenance and overall aircraft expense if anything was to happen.) This is why this is so special. Not only that, you don’t see just one, but two Spirits do two low flybys before finally landing.

We’re not sure how the cinematographer got wind of these two birds flying in, but he did. Arriving at RAF Fairford mid-2014, he set himself up in a great spot with a professional camera. What you see here probably as good it gets when it comes to seeing B-2 footage.

Check it out and judge for yourself.