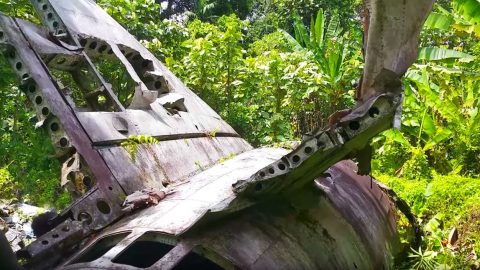 Welcome To The Jungle.

A group of, adventurers you might call them, flew all the way to Bougainville, an island part of Papua New Guinea to show us something not many people have seen since World War II. Isoroku Yamamoto’s crash site.

For those of you who don’t know, though we assume most of you do, Admiral Yamamoto was the mastermind behind the attacks on Pearl Harbor during World War II, among other things. He was shot down during a top-secret U.S. military mission on April 18th, 1943 by a squadron of P-38 Lightnings. What you’ll see in this video is that wreckage.

“Noone’s been here for a while”-Cameraman

The very next day a Japanese rescue party recovered what they could from the wreckage, including the dead body of their beloved Admiral. Since then, the wreckage was only seen by a handful of people, mostly locals.

As the island is remote and the crash site even more so, the site overgrew with brushes so thick the travelers in the video needed a group of locals to cut a path for them. They then proceeded to cut more vegetation around the plane so they could see more of it.

It’s strange that, although we’re not glorifying him, such a historic person’s crash site wouldn’t be visited more often by World War II historians, documentary crews or even people greatly interested in World War II history. Even Japan didn’t haul the wreckage out to put in a museum or something.

UPDATE: We found out that the area has been closed to tourists for some time due to a land dispute between two clans in the area. It’s only recently been reopened.