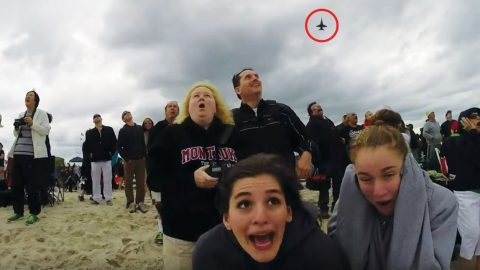 We’re assuming most, if not all of you, have seen a Blue Angel’s Airshow. We say that because as aviation fans, you’d know that they’re one of the best, if not THE best, aerobatic display teams in the world. Not to mention that he shows are free, happen all on the weekends and hit about 34 cities in the United States every year. That’s why we’re assuming most of you have seen them.

If not, let us tell you something. It’s just incredible. The display is nothing short of perfection and the whole experience has you talking about it for weeks afterwards, if not months.

Between the aggressive takeoffs, dirty loops and tuck over rolls, there’s one part of the show (our personal favorite) which can scare the bejeezus out of you if you’re not familiar with it. Well, as a matter of fact sometimes you forget and it sneaks up on ya…literally.

We’re talking of course about the sneak pass.  Hovering around 700 mph (right under the speed of sound), the guys in formation keep you focused on them and then …bam!, the solo comes in from behind ya’. It’s a super cool routine, but the girls in this video were not ready for it apparently.

Just look at their faces. They had no idea what happened until it was already over.