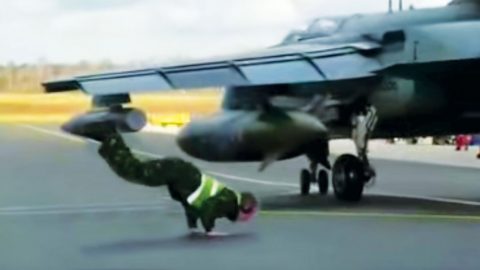 Do What You Love And Love What You Do.

We feel like a lot of you guys out there who frequent our blog and Facebook pages are real sticklers for rules and authority. It makes sense, as we know that a lot of you served and have a high respect for discipline. What we’re about to show you here is the total opposite of that though, so brace yourselves.

To give these guys some sort of logical excuse, they typically stand in the sun all day and on hot, black tarmac. Heat stroke is a terrible thing to get. You get a headache, get all woozy and can’t think straight, so the fact that they’re jumping around like crazy might get explained by that. Otherwise, we can assume that they’re just really excited about their job. Notice however that most of the guys give the pilots a solid, polished salute after they’re done with their crazy little dance routines. Also, notice their mannerisms. They’re actually signaling them exactly the way they should, just…while acting like fools. There’s never any confusion from the pilots as to what they’re supposed to do.

The only confusion on the pilot’s faces is them wondering what the hell these marshals are doing. It doesn’t have anything to do with what THEY’RE actually supposed to do though.