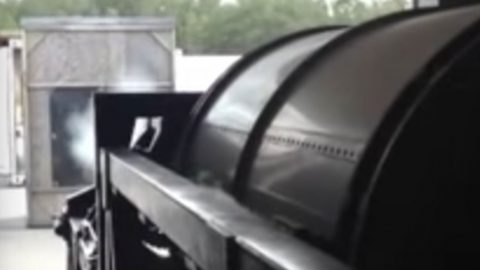 Well, here’s a gem we just found in the depths of Youtube. We’ve seen some pretty cool GAU-8 tests before, but never this close. We’re assuming that this dude works in either servicing or testing the cannon before install and did the right thing. He filmed it.

We do have to admit, though. Although this is the first video of the kind we found, we should be happy with it, but man, why did you turn the camera? It all started so well and right before the GAU-8 went off, he turned the camera so that everything is sideways.

As a quick fix, turn off your phone’s autorotation function. That way you can turn your phone and can see the video bigger and not all stretched out.

Now that we got that out of the way, just enjoy the video. That sound is absolutely unmistakable and fills up the room, if not the county﻿. Seriously, give it a listen. Nothing but that deep, echoing “brrrrrrrrrrrt” followed by well-deserved laughter.

Unless you’re on the receiving end. You hear nothing. You’re dead before that sound hits your eardrums.