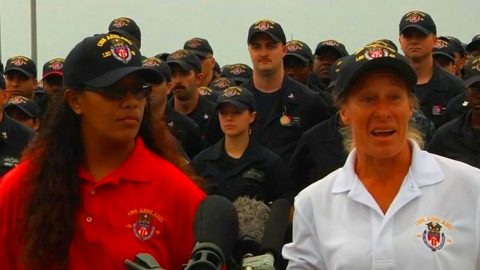 By now you have heard the story of Jennifer Appel and Tasha Fuiava the women rescued by the navy after being lost at sea for five months. Upon their rescue, they told a sensational story of surviving massive storms, shark attacks all with a broken mast and motor. However, many experts have begun to chime in and it just may be a sensationalized story.

The first person to cast doubt on their story was a United States Navy official who asked them why they never felt the need to use their homing beacon. But the women said they never felt they were in enough danger to use it, despite a claim that they would have died within 24 hours of their rescue. However, looking at imagery of these women and their dogs, they do not appear to be in bad health.

“We got into a Force 11 storm, and it lasted for two nights and three days.”

Another sketchy claim they made was surviving a storm that cast huge waves at their ship. Despite this claim, NASA satellite imagery shows no storm in the area that lasted for that duration. Climate scientists explain that smaller squalls popped up in the area but nothing matching the claims made by Jennifer Appel.

Then there is another boast that their 50-boat was attacked by a pack of 30-foot Tiger Sharks slapping their tails against the hull. Given the benefit of the doubt, it is easy to misidentify a shark but no known species has displayed the kind of action they claim.

“They wouldn’t be tiger sharks, and they are not known to have any sort of coordinated feeding strategy, and also they don’t come out of the water.”

Moving forward there is another boast that the spotlight is aiming at, that of the crew who “discovered” them.

“We offered to get them on board the fishing boat and asked whether they needed water or food, but they refused.”

The pair said that the crew threatened them but later changed their story and I don’t know many people who would turn down a free meal, especially after being stuck at sea for months.

Another thing that is poking a hole in their case is the fact that Jennifer Appel has a previous history of working on reality TV shows as an extra. In the end, this voyage for the ages may have just been a chance for her to get another big break.

You can hear their claims in this video clip.