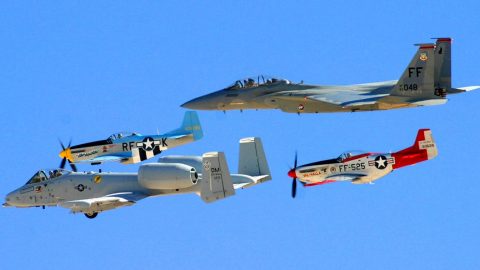 Yesterday the world turned its eyes to the to the biggest game of the year as the Philidelphia Eagles took on the New England Patriots. But before the big game started crowds turned their eyes to the skies to witness a historic flyover. The Superbowl is no stranger to flyovers but this particular one was very special.

Superbowl flyovers usually involve some the latest and most advanced fighter jets and stealth bombers, or the usual Blue Angels to impress the crowds. However, to celebrate the big game they brought in something unusual vintage aircraft. The U.S. Air Force Heritage Flight was brought in to do a flyover and entertain the crowds with P-51s as well as an A-10 Thunderbolt II.

“This is the first time the United States Air Force Heritage team has been able to do a flyover like this. And it being Super Bowl 52 is a pretty big deal. Hopefully we can showcase what the Heritage Flight Team is, because there’s probably a lot of people who don’t go to air shows to get to see that.”

It was a beautiful sight to witness and to know that some of the country’s most accomplished warbird pilots were finally given the chance to fly over the Superbowl.