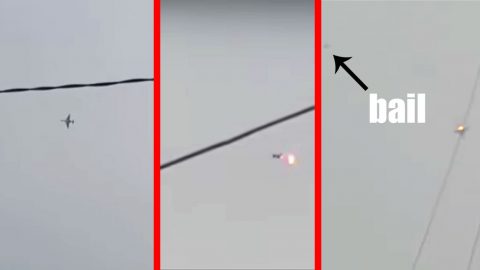 Fought Until He Couldn’t Anymore.

The pilot, Major Roman Filippov, 33, was reported to have enough time to announce he was hit and was about to bail out through COMs, and was seen doing so in the first video below.

“The pilot died heroically. The pilot’s family and friends have our condolences, and we are proud of our heroes.” -Kremlin Spokesperson

According to various news sources, he was surrounded when he landed and fought a brave fight as indicated by his empty pistol issued to him by the air force. Then, “militants surrounded the heavily-wounded Filipov, he waited till they approached and detonated a grenade.”

The last battle of the Russian Su-25 pilot.
Pilot was shooting at the militants who surrounded him and blew himself up with a grenade in order to avoid captivity by militants. pic.twitter.com/prBgITWa9V

The story has been covered by the BBC, RT News, The Business Insider and The Aviationist as well as dozens of other sources.

He’s survived by his wife and 4-year-old daughter.

Here are the videos which have surfaced since February 3rd, 2018.