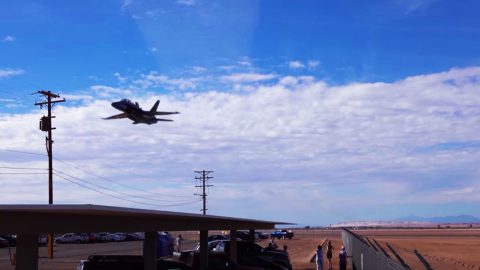 Every single aircraft has its own distinctive sound. Even though some might use the same engines, their aerodynamical differences make them sound different when flying overhead, with most aviation fans being able to name an aircraft just by what they sound like.

We’ve heard the term “blue note” thrown a lot when people talk about F/A-18 Super Hornet, but in reality, most aircraft can hit it when flying fast enough. Although the term was originally coined in jazz music indicating a musician hits a higher pitch note when another sound would be expected, the term fits perfectly in aviation as well.

What we’re talking about here is the higher pitched sound you hear when a jet is really being pushed, especially at low altitude. You can hear it clearly in the video below precisely 3 seconds into it. The Blue Angel jet is already gone and out of the frame, but the sound catches up and you can hear that oh so beautiful blue note.

Check it out for yourself below.