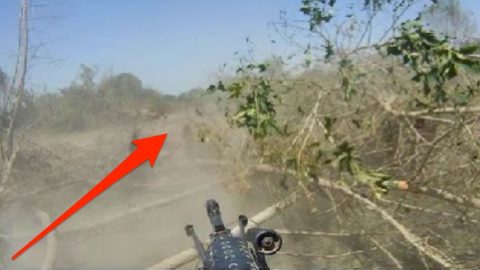 War isn’t pretty but often times conflict is inevitable when keeping peace throughout the world. Soldiers train their best and prepare for the worst and are then thrust into hostile combat zones. There are many places that you wouldn’t want to be caught dead, but Afghanistan is the place where one wrong move will cause your death.

Members of the 508th Parachute Infantry Regiment experienced a very close call with death when they dropped into Afghanistan. Things start off very tame as the soldier begin walking through the brush to their destination. The sound of walking through the grass is interrupted by a single popping sound, followed by more. The troops spring into action and a firefight erupts between the two sides.

Once again it is life or death as all of their training kicks in to fire, reload and repeat the process until your enemies are gone. The whole ordeal isn’t a pleasant one but this bodycam video captures the action so well that it feels like you’re really there.