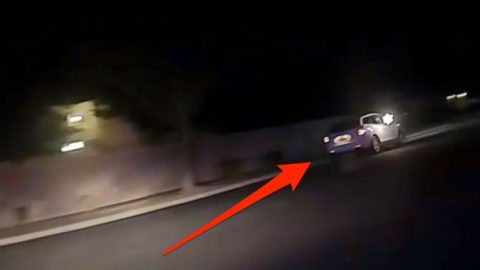 Kids often dream of growing up to be policemen or firefighters, at least they did in the age before they were glued to their iPhone screens. Fortunately, those who are interested in a career of police often have the opportunity to get a peek into the police force by doing routine ride alongs. A police ride along in Madera County turned out to be anything but routine as the situation turned violent.

29-year-old Yessica Valencia was conducting a civilian ride along with a new fresh-faced officer who had only been an officer for two weeks. They were cruising around a neighborhood in Madera County around 4:30 AM when they noticed car blow through a stop sign. The officer hailed down the car to pull over, but it sped up and that’s when things got a little more interesting.

“You don’t know what it feels like until you actually experience something like that. It is really scary.”

The police car gave chase and they sped up through the residential neighborhood. Then the speeding car took out a gun and started firing at the police car. As you can see in this video there is always a worst case scenario even with routine ride alongs.