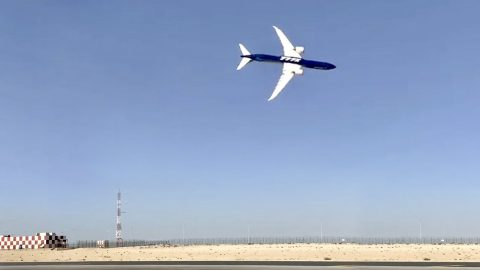 This Boeing 777-9X almost flew upside down during an aerobatic maneuver. The stunt was part of the 2021 Dubai Air Show, so no passengers were on board at the time.

According to a viewer, the maneuver is called the “Derry Turn,” named after British test pilot John Derry. The move consists of a bank reversal during a steep turn while the aircraft is passing through an inverted attitude.

Boeing’s airliner made its public debut at the show after achieving two milestones in the model’s development. Its 15-hour nonstop flight from Seattle to Dubai marked its first international fight and longest flight to date.

No doubt, observers were excited to see what the aircraft was capable of. After all, this massive airliner is powered by one of the largest and most powerful jet engines ever built – the GE9X.