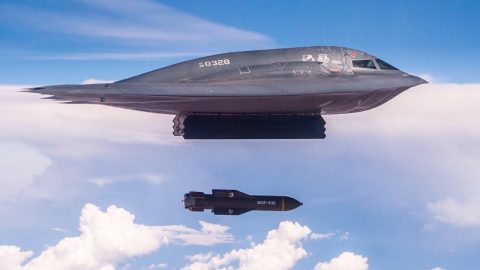 This massive 30,000lb GBU-57 Massive Ordnance Penetrator was dropped from a B-2 Spirit as part of tests conducted at White Sands Missile Range in New Mexico three years ago.

These precision-guided bunker busters are said to be able to penetrate 200ft of concrete before exploding. Its most important mission to accomplish is reaching an enemy’s weapons of mass destruction situated inside well-protected facilities.

However, it is sometimes mistaken with the 11-ton, parachute-deployed GBU-43B. That MOAB was the largest conventional air dropped weapon by the US military and are deployed by MC-130 Combat Talons.

Even though the B-2 Spirit is the only plane carrying the GBU-57, that won’t be for long. When the B-21 Raider is finally commissioned, the US Air Force intends to make the Raider the second home of the bunker buster.