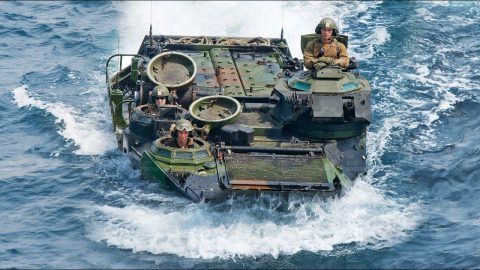 AAVs or Assault Amphibious Vehicles come in troop transport, command and control, and recovery variants. These can be launched from the well decks of specialized ships to enable over-the-beach landings and long-range amphibious assaults.

The amphibious tractors or “amtracs”, as the Marines would call them, can transition from sea operations to land operations via its vehicle tracks. They would move through the water using a propulsion system at the rear of the vehicle just above the tracks.

On July 30, 2020, eight Marines and one Navy sailor died when their AAV sank in the Pacific Ocean during a training exercise. As a result, the USMC announced the indefinite ban of AAVs except for emergencies.

BAE Systems and Iveco’s Amphibious Combat Vehicle was picked to replace the AAVs.