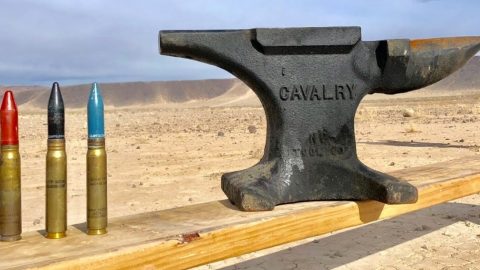 Who would ever think of shooting an anvil with a very powerful gun? Edwin Sarkissian, apparently.

The anvil in question is a steel cast anvil weighing a hefty 118 lbs., or as Sarkissian puts it, “This is a serious anvil, not your Amazon anvil.”

Alright, we get it – it’s big and bad and probably very good at what it does. It’s also about to face a formidable foe.

Sarkissian chooses the red tipped tungsten round to fire with the Typhon 20. It is at least as big as his hand.

Slow motion cameras ready, the crew steps back in the windy desert and lets her rip! There’s an instantaneous ping as the anvil hops like a skipping stone. It doesn’t fall, though. We see the force of wind, an intense flash in front of the anvil, and then the dust begins to clear.

The slow motion shows what is impossible to see in real time: the shell whizzing by, steel flakes flying, and a red hot gaping hole right where the Typhon 20 intended to hit the anvil.

Sarkissian is thrilled. Remember how the round was as big as his hand? Well guess where it is now. Yup, it’s completely lodged inside. Even the mighty steel anvil has to bow to the power of the Typhon 20 and the 20mm. To be fair though, as someone stated in the video comments, anvils are designed to be struck from the top down. They are also not exactly designed to be shot at.

Check out the whole test in the video below. We promise that it’s pretty cool.