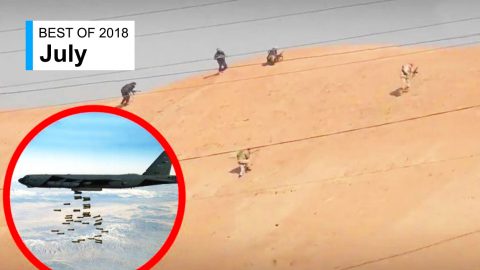 After That, It’s A Whole Different Story.

Bunching up when you’re in battle is never a good idea. Especially when your enemy has the technology to drop a 500 pounder on your forehead right between the eyes.

Here, you’ll see why this style of fighting might cause you trouble. It doesn’t make sense to drop a bomb costing thousands of dollars to take out one guy, but when there is nearly two dozen of them neatly piled on a hilltop and they’re laying down, sure. Let’s take care of 24 birds with one or two stones.

As you’ll see, the guy filming while saying his favorite phrase of all time was trying to capture his buddies bringing the fight to the enemy. He then cuts away to a B-52 Stratofortress up in the distance and next thing you know, there’s just a big dust cloud and his buddies were rolling down the hill.

Now, here’s where we get a bit “propagandaish”. Although we’d like to think this was real, the cutaway to the B-52 looked a bit off. Also, it looked way too low for doing a support mission like this.

Let us know what you think. Is this a normal mission type of the BUFF exposing itself like that to drop a few bombs or just crafty editing by some wishful thinking guy on the internet?