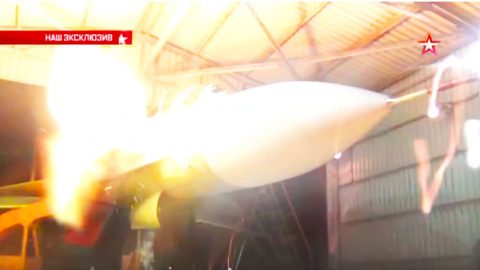 An Su-30 unleashing its gun on the range. | Телеканал Звезда / YouTube

We all know Russians tend to do things a bit differently be it airshows that allow super low and close to the crowd flybys to well, reporters being able to fire massive cannons. Such is the case here.

Meet Alexey Egorov, a Russian reporter who was invited to an air force base to take a look at a new jet. The SU-30SM, pictured below, was upgraded as a specialized version of a previous variant that now sports thrust vectoring nozzles, better radar as well as other modernized systems. In addition, it’s equipped with a sweet cannon that believe it or not was put into the hands of a civilian.

The SU-30SM has a Gryazev-Shipunov GSH-30-1 autocannon mounted on the side of its fuselage. Designed in 1977 and put into full production in 1980, this cannon is used on many aircraft including:

A single-barreled cannon, this baby can shoot up to 1,800 rounds per minute but is specifically limited to 1,500 to save the barrel from wear and tear. Still, that’s 25 30x165mm rounds flying your way when fired.

Check out the video below to see what that looks like. It ain’t no A-10 Thunderbolt II but is still a force to be reckoned with.