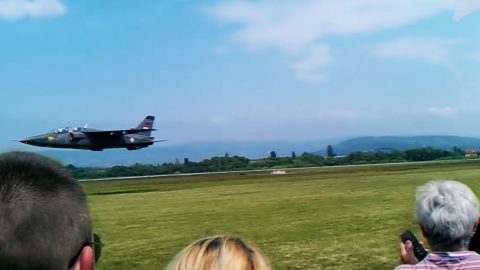 This Is One Of The Best.

With full confidence, we can honestly say that this is one of the sweetest flybys we’ve ever seen. Although some others were slightly lower or faster, this one is just that good because of the way it was captured.

Because of the FAA (we’re not knocking it, but you know what we’re getting at), air shows in the United States are a bit restricted. There are distances that need to be kept and standards to be met. Although this keeps spectators safe, you will probably never be buzzed like the people in this video.

From doing some research, we figured that this epic flyby came to us from somewhere in south-west Europe as the language we heard in the video was Bosnian.

Also, the plane you’ll be seeing is called a J-22 Oroa. After digging around a bit, we gathered that these planes are used by the Yugoslav, Serbian and Bosnian air forces and despite being nearly 5o years old, are still in service.