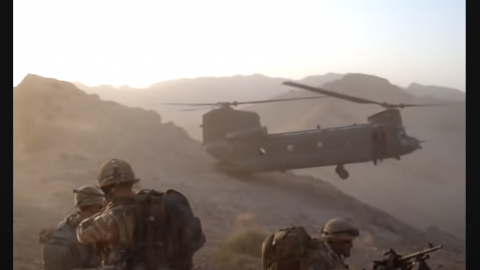 A handful of soldiers couldn’t help but watch the CH-47 Chinook pull off such a hard landing. According to the video uploader, this shot was taken during an operation outside Kabul, Afghanistan.

Throughout the Afghanistan war, the D variant of the Chinooks was deployed by various operators. In combat theaters, their role was to insert troops into bases while also supplying food and ammunition.

Despite its age, its proven versatility and capability to operate in austere locations made it the preferred helicopter of many nations.

The Chinook’s lifting capacity was particularly valued in the mountainous terrain of Afghanistan. The country’s high altitudes and temperatures limited the use of other helicopters, but the CH-47s pushed through. As you can see, this Chinook pilot made it look easy.