Life Inside Massive US Destroyer in Middle of Sea 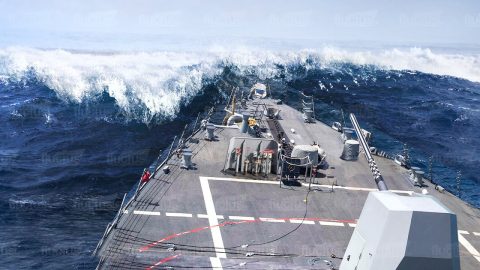 At least three hundred enlisted crew members are on board the 300-ft-long Arleigh Burke-class destroyers during normal operations.

Reloading and Maintaining The Mark 45

Its Mark 45 gun mounted on the ship’s forward deck needs a six-person crew below deck to keep the cannon fully stocked with ammunition. Most of the time, however, is spent cleaning and maintaining these guns.

Regular maintenance is a huge part of these sailors’ lives at sea. Every day, you can expect the crew members to work around the clock to ensure their vessel is in the best shape possible.

Some areas on its deck are treated frequently with corrosion-resistant paint to prevent damage from salt water and air. Meanwhile, welders below the deck work to fix or replace the components for all sorts of ship parts.

While US Navy destroyers are sometimes tasked with daring missions, they spend most of their time moving throughout the world’s temperate seas.