Dashcam Footage Shows A Guy Being Passed By A Huey 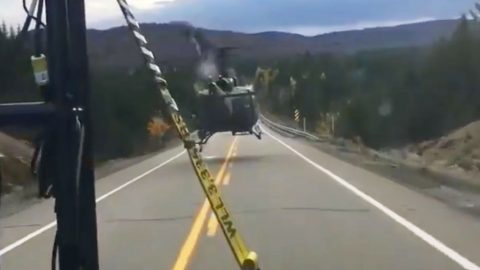 This is one of those videos you have to see to believe. It’s not every day that you can be driving on the road and see a UH-1 Huey swoop in between two cars, cruise a few inches above the asphalt and get outta dodge.

Well, we have video proof that actually happened.

While perusing the web as we normally do we came across this little gem on Instagram. Owned and operated by Fred North, we wouldn’t expect anything less than what we saw. For those of you who don’t know who he is, let us assure you you’ve probably seen plenty of his work.

He’s been in the business for 30 years now and shot over 130 movies, but some of the work you might recognize is Mission: Impossible – Rogue Nation, Lone Survivor, Total Recall, Gladiator as well as many, many other films.

Although we don’t know for what movie the stunt below was shot, we reckon there might be a new war movie coming our way. From the looks of it, it might be good.