U.S.’ Best Fighters Were Just Filmed Together In Formation For First Time Ever 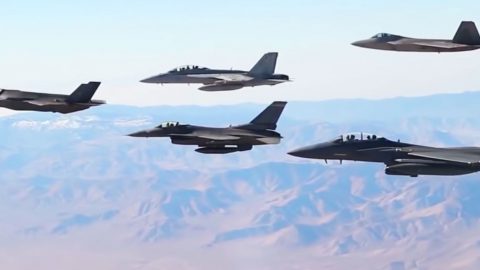 For the first time ever, you can see all of the United States’ jet fighters together in the air at the same time. You’ve got our newest 5th generation fighter leading the way, the F-35 Lighting II, followed by the F-18 Hornet and F-15 Fighting Falcon and last but not least, the F-22 Raptor and F-15E Strike Eagle.

Quite a beautiful scene over @Travis60AMW​! A KC-10 Extender flies alongside an F-35 Lightning II during Orange Flag, which evaluates teamwork during joint-force integration. #TankerThirstThursday pic.twitter.com/KNbPj5wwY2

This formation took place over the deserts of California in mid-December, 2018. Units squadrons from Edwards Air Force Base, Nellis Air Force Base and China Lake were conducting a joint operation to “capture data and assess the interoperability of multiple aircraft platforms in an environment outside of traditional Ewards testing.”

Orange Flag, as the event is called, is a flight test between the Air Force, Marine Corps and Navy in which 28 aircraft across all the branches participate. It’s a chance not only for pilots to work together, but also engineers and airspace operators as well.

What you don’t see in this video are other aircraft participating in the event a bit higher up. Those include a few B-52 Stratofortresses, B-2 Spirits and B-1 Lancers. Now that’s something we’d also want to see a video of.