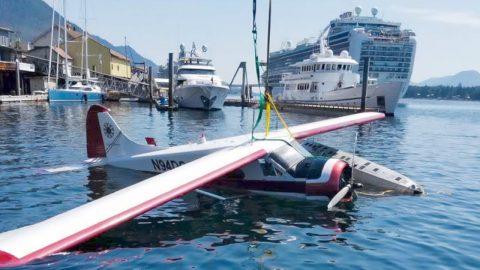 A video recording taken from a cruise ship captured a 70-year-old aircraft moments before its accident. The aircraft in question was a float-equipped de Havilland DHC-2 operated by a certified pilot/flight instructor.

According to the pilot’s official statement, he departed the airport dock shortly after providing the four passengers with a preflight safety briefing. However, upon touchdown, the airplane landed parallel to an ocean swell and quickly veered to the left.

The aircraft then water looped and began to submerge with its nose down. Fortunately, a fishing boat rushed to the scene and assisted the five occupants inside the airplane. The passengers were able to exit the aircraft with their life vests on and with no injuries.

After investigations, the NTSB determined the probable cause to be a loss of directional control while landing, which resulted in a water loop.