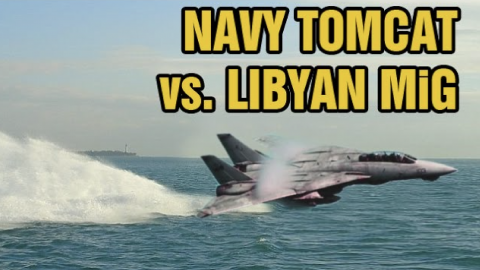 Some declassified footage from a 1989 encounter has surfaced online in which two F-14 Tomcats went up against two MiG-23 Floggers from Libya. This happened after a patrol over the Meditterean when all of a sudden The tomcats encounter 2 MiGs. At first the Tomcats decided to turn and avoid the other aircraft, when all of a sudden they were on a collision course with the MiGs. It was clear that this was some kind of intimidation or challenge. It seemed like the MiGs were “mirroring” every move of the Tomcats, as they were trying to turn away. In this footage, you won’t see much until the end, but you can hear the navigators engaging the MiGs and it is very intense! Check it out: