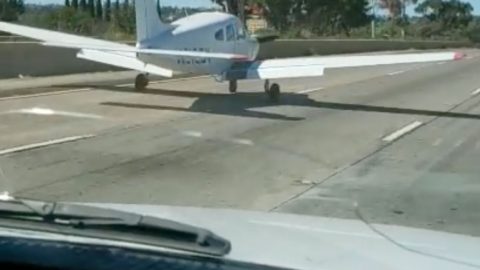 At 11:15 a.m., PST, a small aircraft landed on I-8 near El Cajon, California. No one on the highway nor the two people in the aircraft were injured.

According to a local report, a student pilot and his instructor from California Flight Academy encountered engine trouble during the flight. They tried making it to the closest airstrip just a few miles away but were unsuccessful.

As the description of the video states, “Turn the volume down if you don’t want to listen to a bunch of ‘holy sh*ts.'”

As you can imagine, the folks recording did not expect to see what they did and tensions ran high.

The instructor took over the controls and landed the aircraft the safest way he could and as aviation fans, we can confidently say this didn’t even look like an emergency when he touched down. As the footage below shows, he put the plane down right between the cars on the road in a gentle fashion, not hitting anything around him and even pulling over to let cars behind him pass.

#breakingnews the guy in black is the #herooftheday. He’s the #instructor who landed the plane. Again, not a scratch on the plane and no one was hurt! Just a bit of traffic on the 8 and Mollison exit is shut down where plane came to stop.@fox5sandiego pic.twitter.com/k48J4IHann

The footage below shows the aftermath of the incident, with San Diego Police blocking off the highway ramp to tow away the aircraft.

Aircraft makes emergency landing on I-8

LIVE: An aircraft has made an emergency landing on westbound I-8 at 2nd Street in El Cajon. https://bit.ly/2AhYSkz

Excuse my language guys… turn the volume down if you dont want to listen to a bunch of "holy shits". Taking Mason to the dentist and this just happened in front of us on the 8 freeway. Major props to these two dudes for landing without any problems. Zach Decker