Ever Wonder What’s In A Navy Aviators Survival Kit? Well, Here You Go. 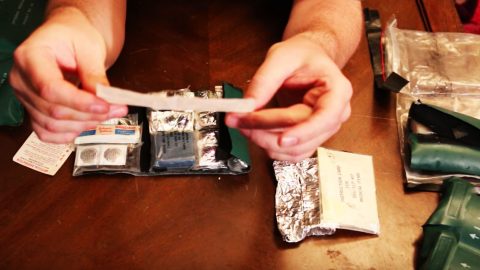 Imagine you’re a Naval aviator and something goes wrong on your mission. Your aircraft gives out on you or god forbid you get shot down and you’ve got to bail. You’re by yourself wherever you land, most likely behind enemy lines, and you have to survive until you’re found although you don’t know how long that’ll take.

What do you do? How do you survive on your own?

Well, that’s where the U.S. Navy survival kit comes in to help you out. The guy from the YouTube channel MrBrowningm1911 got his hands on one of those kits and will show you exactly what’s contained in it.

We’re not going to write about it here as the video goes into a lot of detail, but we’ll say that we found some neat info about VFA-303 which is where this kit served. The unit was a Strike Fighter Squadron which was active from July 1st, 1970 to December 31st, 1994. It was deployed on USS Ranger (pictured above) and USS Abraham Lincoln and was responsible for increasing the combat readiness of the Naval Air Reserve Force.