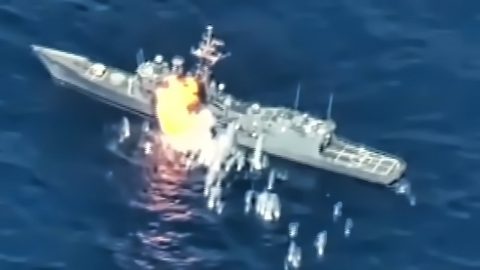 A decommissioned frigate became the target of missiles and torpedoes during a military exercise at RIMPAC 2016.

The live-fire sinking exercise (SINKEX) was performed near the coast of Hawaii and included Australian, South Korean, Canadian and American navies. No less than 27 nations, 40 ships and submarines, 200 aircraft and 25,000 personnel participated at RIMPAC 2016. The exercises include visiting, boarding, search and seizure drills, disaster relief, and testing new technology in a high-profile training environment.

During the SINKEX, the USS Thach took five hours to sink. This was after taking four Harpoons, four Hellfires, a Maverick, an Mk 84, a GBU-12, and finally an Mk 48.  Of course, the ship had no crews on board and the engine wasn’t running. Before it was used for target practice, it was scrubbed clean from any harmful and flammable materials.